A special thank you to the Scottish American Society of Michigan for awarding Bill Grogan's Goat the Paterson People's Choice Award for Best Performer at the 2013 Midwest Highland Games!

The trophy was named after the late Joe Paterson, who was a bagpiping tutor in Royal Oak. The Scottish American Society of Michigan established the award in 2012 at the Highland Games at Canterbury Village, and the first recipient was the Michigan Scottish Pipes and Drum Band.

We are thrilled to be recognized as the winner for 2013!

Be sure to check out some of the latest podcast episodes in the Celtic Rock world that have featured our music.  These are great compilations to help you discover new songs and artists.

Bill Grogan's Goat has been featured in the Detroit Metro Times.  Thank you to Brett Callwood and City Slang for this amazing article.

The problem that faces most Irish- and Celtic-themed bands outside of, well, Ireland and Scotland (and Boston) is that, outside of the one week surrounding St. Patrick's Day, the music can sound curiously out of place, much like listening to Christmas carols in spring.
Of course, that is the view of the casual listener. For others, Irish and Celtic music is a way of life. Bands like the Dubliners, the Pogues, the Proclaimers and, later, the Dropkick Murphys and Flogging Molly dragged Celtic folk toward rock and punk audiences with great success.

Those bands held onto the authenticity of the music — specifically the lyrics — while beefing up the sound courtesy of electric instruments. Purists might see this as blasphemy, while the open-minded can enjoy the progression.

Bill Grogan's Goat is one such band, deftly merging progressive hard rock with Irish, Scottish and English folk and emerging with something that is both stomp-heavy and intricate. The band of fortysomethings is made up of regular looking peeps, though there's a sparkle behind all of their eyes that suggests that, given the right circumstances, the hard-drinking days aren't quite behind them yet.

The band members are Mindy Whalen (fiddle, whistle, highland pipes, vocals), Gerard Smith (vocals, mandolin, guitar, banjo, bouzouki, bodhrán), Jude Closson (drums), Norman Rosenbaum (guitar) and Matt Twomey (bass). Smith and Closson previously played around town together in a "funky hardcore" band called Kuru in the mid-to-late '80s. When that was done, Smith decided that he wanted to play music that he could create by himself, which led to his discovery of Celtic and English folk. A few solo albums later, and he reunited with Closson and pulled in Rosenbaum, and Bill Grogan's Goat was born. Whalen and Twomey came along a little later.

Sonically, the Goat mix traditional Celtic music with prog metal a la Tool and Porcupine Tree, the first wave punk of the Pistols and the Buzzcocks, Irish rock like Thin Lizzy and Scottish rock like the Sensational Alex Harvey Band. It's a heady brew.

So where the hell does that awesome band name come from? "There's an old American folk song of that name about a guy named Bill Grogan who had a goat that ate his red shirt," Smith says. "Bill gets pissed off at him and ties him to a railroad track and as the train's coming down the track the goat coughs up the shirt which flags down the train and everybody lives happily ever after. My granddad used to sing it to me. It's a very funny song."

The interview takes place at the Berkley Front, a convenient meeting point for the band members, most of whom are based around Royal Oak and Ferndale. He might deny it, but Smith is the natural leader here. Regarding the band's sound, "The original concept was to deconstruct traditional music and reconstruct it as something else," he says. "Usually that happens, by taking these old songs and practicing them. Mindy's got a good background in instrumental music from being in a pipe band. I've been playing Irish, Scottish and English music for 20 years. Sometimes, once we started to practice the song, some other form of rock will progress itself into the song. One of the songs became a Latin clave, for example. Whatever suggests itself through working on the song."

While Twomey is second-generation Irish, the band's fascination with Britain and Ireland comes from afar. "I think before I came along, almost everything was Irish and I brought in Scottish," Whalen says. "We visited the family farm 15 years ago, and I was raised on Clancy Brothers or, as my grandpa called it, rebel music," Twomey says. "My mom would make me play music and then give me a whole history lesson on it, when I just wanted to watch TV."

Bill Grogan's Goat plays an annual show on Parade Day at PJ's Lager House, and the band members agree that the show is usually the highlight of the year. However, they don't want to be seen as a "holiday band," and they shouldn't.

"I came from a trad background, and everything we do is not like what anybody else did," Whalen says. "A lot of Celtic rock bands you can listen to and hear the versions done very similarly by other bands. I've never heard anybody do 'Danny Boy' the way we do it."

One has to wonder how many like-minded bands are in the Detroit area. Detroit isn't, after all, known for its Celtic scene. "There's actually a good trad scene here," Smith says. "There are a couple of Celtic rock bands. We end up playing a lot out of town. One review said that if your young nephew hates Irish music, this is what you want to play him."

"We play every Irish bar," Twomey adds. "In fact, every place they have beer. We don't do coffee shops."

So is the Goat's music best enjoyed when hammered drunk? "The music is great sober, my jokes are hysterical drunk," Twomey says. "So come sober and drink a lot of beers. If anybody has to tune, Matt will tell a joke."

Naturally, as a band with a niche audience, the Goat has played a couple of stinking shows on inappropriate bills. "The headline band wasn't there at Paychecks, and in fact there was literally nobody there," Smith says. "The first group were some young kids who knocked their instruments around, threw some stuff on stage and left. We haven't had many like that though."

What's next for the band?

"Have you seen the age of the band here?" Twomey says. "We've got no time. We're trying to get a third album knocked out by St. Patrick's Day. We want to do about 50 percent original stuff this time. Short-term we want to play the festivals. There are a lot of roots festivals, rock, Celtic, punk. Cracking the scene is always hard. The bar scene is a lot easier. So far, the festival scene has proved elusive."

That's Bill Grogan's Goat — a sweaty party band to drink and stomp to. It's not pretty but it's sure as hell fun. As we end the interview, this writer asks the band if I captured the "inner them."

Whalen says, "You don't want to go there."

Second Wind has garnered another stellar review this week.

Bill Grogan’s Goat, the band from Detroit that was featured on our March 2010 sampler, released their second album “Second Wind” at the end of 2011. The album got a rave review at Shite’n’Onions and it reached no. 5 at Grinning Beggar’s Best of The Rest Artist & Albums 2011. This is a good background, but I had to give some spins to the CD in order to verify if I seconded those opinions.

When an album full of traditional/Celtic standards is released, the songs have to get a different treatment to become interesting. If the band offers the usual songs with the usual arrangements, the listeners will find them boring. But if the musicians re-arrange the songs and record their own renditions, then the fans will appreciate them. Some good examples are Icewagon Flu and The Pubcrawlers on their recent split with The Ousiders.

So, have Bill Grogan’s Goat succeed or have they failed? They have really succeeded. Why? Because their album is a sure bet: guitars, guitars and more guitars. And the addition of a great deal of pipes, fiddle and tin whistle performed by multi-instrumentalist Mindy Whalen.

Regarding the track listing, one can say that most of the tracks have been covered by a lot of bands. That’s true, particularly “The Foggy Dew”, “Danny Boy” and “Drunken Sailor” can be found on different albums that have been released in 2012. But you should remember that Bill Grogan’s Goat released this album before those albums were issued.

If I had to choose the best moments of the album, these would be the numbers that I would pick : the two sets of tunes on the album, “Pumpkin’s Fancy” (bagpipes on this) and “Stress Bay” ( a top-notch Scottish set featuring excellent fiddle and guitar arrangements); “Cam Ye O’er Frae France” (Mindy sings and plays the pipes on a cover as good as the Steeleye Span's version) and “Galway Races" (a fantastic work on this song: fiddle, guitar parts …)

Anyway, there are other songs that deserve to be heard: “Waxie’s Dargle” (kick-ass guitar version featuring “The Siege of Ennis” polka at the end), a funky version of “Whiskey You’re the Devil” and “The Mermaid” (a song that was covered by Fiddler’s Green in 1995)

If you like the mix of Celtic music with the Detroit r’n’r tradition, then Bill Grogan’s Goat “Second Wind” won’t disappoint you. 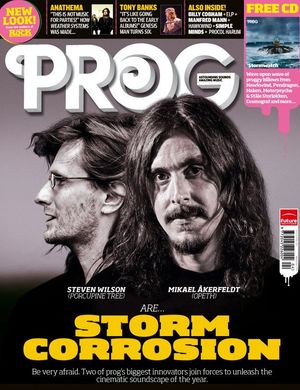 We're thrilled to announce that a track from "Second Wind" is featured on the music sampler CD accompanying the latest issue of Prog Magazine.

The issue (#25/July) is on stands in the US and UK now.  Pick up a copy today, and remember, you can purchase the entire album of "Second Wind" here on our web site if you like what you hear!